I have a confession to make.  I normally hate mysteries.  Like nails on a chalkboard.  My mom lovingly passed on her Nancy Drews to me and I lovingly shoved them in a drawer.  So usually I decline mysteries when offered but when I was offered a chance to review Amy Lillard's first Kappy King book I was intrigued, because I DO love Amish books.

I don't know what magic pixie dust was in Kappy's story but I was hooked.  Now Kappy is back again! 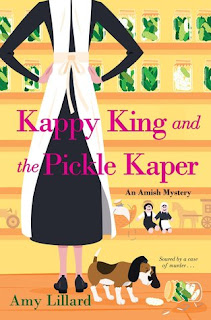 Kathryn "Kappy" King is happy being a plain-spoken unmarried odd-woman-out in her Pennsylvania Amish hometown. Her talent is making the special kapps local women use to cover their hair. But her skill at uncovering trouble in this quiet valley is about to be truly tested . . .

At first, young Sally June Esh's tragic death doesn't look like murder. Even in peaceful Blue Sky, collisions between buggies and Englisch cars aren't unheard of. Still, the Eshes are skilled drivers used to delivering their popular pickles for miles around. And after Kappy notices Sally's buggy was deliberately run off the road, her ex-Amish friend Edie gets strange texts saying the crash was no accident . . .

Kappy won't let her community's silence keep justice from being done. And even though a still-shunned Edie thinks of moving back to the city, she and Kappy start rooting out secrets about the Eshes' long-time neighbors--and new pickle-producing rivals. But when they learn that Sally's brother is secretly courting an Englisch girl, their investigation takes a disturbing turn . . .

You need to read book one, Kappy King and the Puppy Caper before you read this one.  You will miss a lot of references back to the first story.  It's also a really fun read and a great start to the series.

Kappy and Edie are just plain fun!  No pun intended.  Kappy marches to the beat of her own drum and together they are magic.  This book is a really fun light read and Amy Lillard shows her versatility in being able to write a cozy mysteries as well as great fiction.

With humor, twists and turns, and guessing who done it until the end (I guessed totally wrong), this is one mystery that won't end up in my drawer or yours.  So pick up your copy and enjoy a dill-lightful story.  Happy Reading!

Disclaimer: *Disclosure of Material Connection: I received a copy of this book for free in the hope that I would mention/review it on my blog. I was not required to give a positive review, only my honest opinion - which I've done. All thoughts and opinions expressed are my own. I am disclosing this in accordance with the Federal Trade Commission's 16 CFR, Part 255: "Guides Concerning the Use of Endorsements and Testimonials in Advertising.*
Posted by Many Kinds of Families at 4:13 PM No comments:

I love a good series!  I get to spend time and invest in the characters and story lines.  When I heard that the Hope Chest of Dreams Series was going to have another story I couldn't wait to get my hands on it! 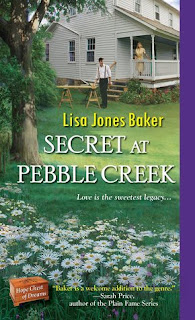 When Jessica Beachy temporarily moves into the home of her late great uncle, Sam Beachy, she merely plans to remodel, sell, and head back to the city. She's used to busy St. Louis and can't imagine how she'll spend her time in the quiet Amish countryside. But the carpenter she hires, Eli Miller, doesn't think selling Sam's home is a good idea. And while he's steadfast in his Amish faith, he's instantly drawn to Jessica's vivacity and unexpected caring--especially as peaceful country ways make her question the dream she thought she wanted . .

But a lucrative offer to turn the house into a vacation retreat confronts Jessica with a heartbreaking choice. It will take trust, perseverance--and discovering a hope chest thought forever lost--for Jessica and Eli to boldly face obstacles and embark on a joyous future together . . .

So after I ran around and hugged my book I got around to the serious business of reading it.  I am going to start out by saying that you need to read the other books in the series first.  This book doesn't release until August-ish so you have time.  Yes, you could pick this up and read it but you are going to miss some of the back story lines and really miss out on getting to know the characters on a deeper level.

Sam and Esther were like ripples in a pond.  Their lives impacted a community and reached beyond to Jessica.  Jessica touched my heart with her story.  Broken, lost and wary will she find peace in her new community?

With a dash of mystery, a handsome carpenter, and old friends from previous stories this was a wonderful read.  With prayer and trust in the One who holds us in the palms of His Hands all things are possible.  Will Jessica learn to lean on Him and find the love, home, and family she's been waiting for?

Pick up your copy of Secret at Pebble Creek and find out!  Happy Reading!

Disclaimer: *Disclosure of Material Connection: I received a copy of this book for free in the hope that I would mention/review it on my blog. I was not required to give a positive review, only my honest opinion - which I've done. All thoughts and opinions expressed are my own. I am disclosing this in accordance with the Federal Trade Commission's 16 CFR, Part 255: "Guides Concerning the Use of Endorsements and Testimonials in Advertising.*
Posted by Many Kinds of Families at 1:16 PM No comments:

The Hawaiian Discovery by Wanda and Jean Brunstetter (Book 2)

I love it when I am whisked away to a unique location when I read. 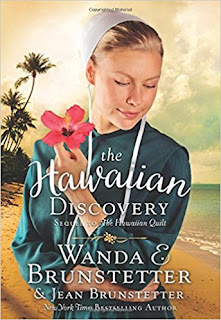 From the back:  An Amish Woman Finds Love in Hawaii

Ellen Lambright mourned when her best friend, Mandy, moved from Indiana to Hawaii. But now Ellen has received the Amish church’s permission to go to Hawaii and help Mandy through challenging times. Rob Smith works on the Williams family’s organic farm, far from his past mistakes and burning regrets. When Ellen befriends Rob, the attraction is mutual, but her commitment to the Amish faith stands between them. Could a heartfelt discovery lead to forgiveness, reunion, and love? Or is Ellen’s destiny waiting for her in Indiana?

Find out in this sequel to The Hawaiian Quilt from New York Times bestselling author Wanda E. Brunstetter, writing with her daughter-in-law Jean Brunstetter.

This book is the sequel to The Hawaiian Quilt which you should definitely pick up and read first.  The book can stand alone, but you miss some of the finer points and details.

Mandy and Ken now own a B and B in Hawaii.  Ellen is the main character and I really enjoyed her.

As we've come to expect with Wanda and Jean's books there are a lot of twists and turns that come out to surprise the reader.  The two make a dynamic storytelling team and it's always fun to see what they come up with.

With beautiful prayers, scriptures, and surprises this fun and fast paced read is worth saying Aloha to.  So pick up your copy of The Hawaiian Discovery on June 5th and get ready for a great story!  Happy Reading!

Disclaimer: *Disclosure of Material Connection: I received a copy of this book for free in the hope that I would mention/review it on my blog. I was not required to give a positive review, only my honest opinion - which I've done. All thoughts and opinions expressed are my own. I am disclosing this in accordance with the Federal Trade Commission's 16 CFR, Part 255: "Guides Concerning the Use of Endorsements and Testimonials in Advertising.*
Posted by Many Kinds of Families at 9:13 AM No comments:

I'm back in the saddle!!  It's been a long few months due to my little one's health issues and I'm behind on my reviews.  I'm playing catch up and headed to the Colonial American Frontier. 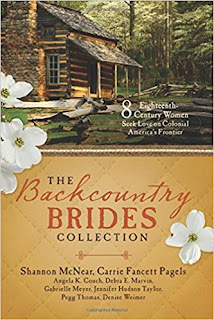 In this collection eight women seek love on the frontier: Love on Colonial America’s Frontier

Travel into Colonial America where eight women seek love, but they each know a future husband requires the necessary skills to survive in the backcountry. Living in areas exposed to nature’s ferocity, prone to Indian attack, and cut off from regular supplies, can hearts overcome the dangers to find lasting love?

Heart of Nantahala by Jennifer Hudson Taylor
1757 - (North Carolina)
Joseph Gregory plans to buy a lumber mill, but Mabel Walker becomes a formidable opponent. When she’s forced to make a painful decision, she must choose between survival and love.

Her Redcoat by Pegg Thomas
1763 - Fort Michilimackinac (Michigan) during Pontiac’s Rebellion
Laurette Pettigrew grew up in the northern frontier. Henry Bedlow arrived against his will. Their chance meeting changes everything. Will a deadly clash of cultures keep them from finding happiness?

A Worthy Groom by Angela K. Couch
1771 - Sapling Grove settlement on the Holston River (Tennessee)
The Cowden temper has been Marcus’s lifelong bane. A trait Lorinda Cowden curses. Now, winning the heart of his bride hinges on fighting a war without raising a fist.

Across Three Autumns by Denise Weimer
1778-1780 – (Georgia)
Fighting Loyalists and Indians, Jenny White settles for strength over love . . .until Scottish scout Caylan McIntosh leads her family on a harrowing exodus out of Georgia’s Revolutionary “Hornet’s Nest.”

The Counterfeit Tory by Shannon McNear
1781 – (South Carolina)
Tasked with infiltrating an infamous Tory gang, Jed Wheeler has no wish to endanger the leader’s cousin, Lizzy Cunningham. He risks not only his life. . .but his heart.

Love’s Undoing by Gabrielle Meyer
1792 - Fur Post on the Upper Mississippi River (Minnesota)
When Englishman Henry Kingsley meets Abi McCrea, the daughter of a Scottish fur trader and Indian mother, will their worlds keep them apart, or have they finally found somewhere they truly belong?

I love a good collection and each one of these stories tell a unique tale but weave together well in the book.  I was especially drawn to Magdalene from Shenandoah Hearts.  She was spunky and I enjoyed her immensely.

The years span from 1754-1792 and the writers took a lot of time and effort in researching their work.  Take time and read the author notes, some have web pages and/or Pinterest boards with the actual history that they drew ideas from. The history buff in me appreciates the time and effort that this took.

This was a really great read and I enjoy the collections I get from Barbour.  So pick up your copy of The Backcountry Brides and get ready to ride back to a different era.  Happy Reading!

Disclaimer: *Disclosure of Material Connection: I received a copy of this book for free in the hope that I would mention/review it on my blog. I was not required to give a positive review, only my honest opinion - which I've done. All thoughts and opinions expressed are my own. I am disclosing this in accordance with the Federal Trade Commission's 16 CFR, Part 255: "Guides Concerning the Use of Endorsements and Testimonials in Advertising.*
Posted by Many Kinds of Families at 8:11 AM No comments:

Me and the hubs! 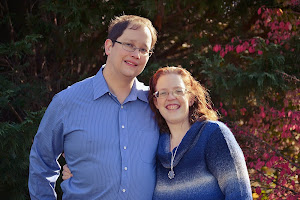 I'm a wife, mother, renegade Montessori teacher, avid reader, and learning to navigate the world with IBS and a low FODMAP diet. This blog has a little bit of everything. Teaching, food, and books! So pull up a chair and stay awhile.